Judith Pott’s mother, Esme, was terrified that the faceless people who sat on her sofa and the gargoyle-like creature that hopped from table to chair meant she had some form of mental illness. Neither her GP nor her optometrist had ever heard of Charles Bonnet Syndrome (CBS)…

Charles Bonnet Syndrome (CBS) is a serious side-effect of sight loss. In a person of any age who has lost over 60% of vision (which is halfway down the optometrist’s chart) from any eye disease, stroke, cancer, diabetes or accident, it produces vivid, silent, visual hallucinations which range from disturbing to terrifying.

For far too long, ophthalmologists have been well aware of CBS but have dismissed it too lightly and not warned patients that it might develop.  It might not, but forewarned is forearmed and should a giant rat scurry across the floor, it helps a little to know that this is probably due to CBS.

No one warned my late Mother – Esme – and she, like so many before and after her, lived in silence in her frightening world of hallucinations, fearing that they might be due to a mental illness. When she did, finally, break her silence and described to me the faceless people who sat on her sofa, the tear-stained Victorian street-child who followed her everywhere and the hideous gargoyle-like creature who hopped from table to chair – plus the times when the whole room or garden morphed into somewhere completely different – I was conscious of the word ‘dementia’ hanging in the air.

With a huge piece of luck, I read a tiny paragraph in a newspaper, which could have been written by Esme. With great relief, I contacted her ophthalmologist – who refused to discuss CBS; her GP who had never heard of it – and thought it ‘unlikely’; and her optometrist – who was equally unaware of the condition. The internet seemed to be the only answer and there I found Dr Dominic ffytche at King’s College London who was – and still is – the sole globally acknowledged expert on CBS.  He explained to me that when sight is diminished or lost, the messages from the retina to the brain slow or stop but the brain – instead of quietening down – fires up and produces images of its own.  What is seen – people, children, animals, insects, rodents, vehicles, grotesque faces, landscapes, fire, water, patterns, colours, whole scenes – depends on which part of the brain is firing.  He helped me to work out some coping strategies for Esme, which – along with reassurance – are the only treatments available.  The strategies give temporary relief but, for the rest of her life, Esme was plagued by hallucinations. As yet, there are no medical consultants who specialise in CBS.

It was obvious that awareness of CBS and the negative affect it has on the lives of those who experience it needed a wider audience.  In November 2015 I launched Esme’s Umbrella(www.charlesbonnetsyndrome.uk) at the House of Commons, with Dr Dominic ffytche as my medical adviser.  It became apparent immediately that there were many more people in need of support than anyone had realised and my newly founded campaign was inundated with calls to the Helpline – 0345 051 3925 (which is answered, courtesy of The Help and Information Service, 24 hours a day every day) and emails (esmesumbrella@gmail.com). We now estimate that there could be up to three quarters of a million people living with CBS.

The calls and emails continue at an escalating rate and, last year, Esme’s Umbrella made some giant strides.  First of all, Fight for Sight (the only UK eye charity that does research into every eye condition) offered me a Restricted Fund under its auspices.  Donations can be made via Just Giving (https://www.justgiving.com/fundraising/EsmesUmbrella or by cheque, written to Fight for Sight with FOR ESME’S UMBRELLA on the back and sent to Fight for Sight, 18 Mansell Street, London E1 8AA.  All the money is guaranteed to be spent on CBS research only.

With the financial help of Fight for Sight and The Thomas Pocklington Trust, I was able to appoint a researcher.  Dr Greg Elder will work with Dr John-Paul Taylor (whose focus is already on CBS) at Newcastle University, both in conjunction with Dr Dominic ffytche, who continues his work at King’s London.

Esme’s Umbrella was given an official CBS Awareness Day on which Dr ffytche and I met a group of 40 people with CBS and heard their support needs. Out of this meeting came my mission for 2018, which is to find funders or sponsors willing to offer space and time, for Esme Room Support Groups. Eventually, I would like to include specialist nurses, counsellors and relaxation therapists too. Exchanging experiences over a cup of tea helps the isolation CBS causes.

Consultants at Moorfields Eye Hospital will host the first-ever CBS Patient Study Day in 2018.  This will bring CBS into the open as never before and no one will be able to dismiss it as ‘just a side effect’.

Lastly, at the invitation of the President of the Royal College of Ophthalmologists, I have been invited to speak at the Royal College’s Congress in Liverpool in May. I will be emphasising the need to give a warning about CBS  and encourage patients to confide about their hallucinations.

If you need support, please do not live in silence, contact Esme’s Umbrella. 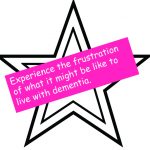 How difficult can it be to draw a star? 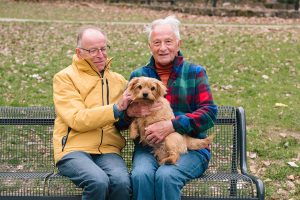 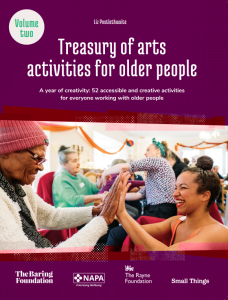 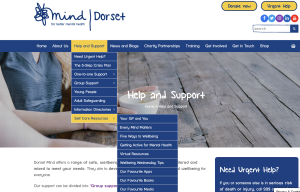 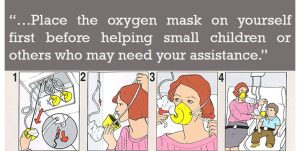 Taking Care of the Carer by Julia Powell